For all their roaring at each other, Trump and the corporate press are really best of enemies

Now that the media is protesting the suspension of Jim Acosta’s credentials Sam Husseini asks why he and the other journalists didn’t intervene on his behalf when he was expelled from a news conference.

CNN’s Jim Acosta has had his White House press credentials suspended following a tense exchange with Trump on Wednesday. CNN, the White House Correspondents’ Association and others have denounced the move.

On a superficial level, I empathize with Acosta. At press conferences I try to ask tough questions. At State Department briefings, spokeswoman Heather Nauert has carefully avoided calling on me, especially after this exchange when she refused to say what State’s position was on torture and evaded criticizing Saudi Arabia and Israel.

I was suspended from the National Press Club for a time (the ethics committee eventually overturned it) after confronting a Saudi autocrat at the start of the Arab uprisings. And this summer I was forcibly ejected from the Trump-Putin news conference in Helsinki for nothing more than carrying a sign with the subject of my question — a tactic I hoped would increase my chances of getting called on. 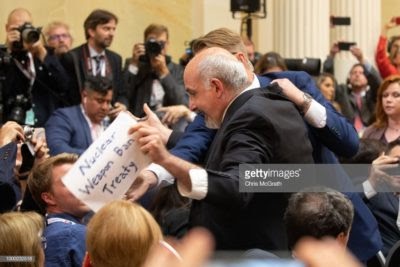 This is interesting in part because of how he and his network failed to extend that same solidarity to me that day in Helsinki. Among other things, after I was forced out of the room, while clutching my sign, “Nuclear Weapon Ban Treaty,” Anderson Cooper asked Acosta what was going on. Acosta said I was being forced out and described me as “a man who identified himself with The Nation, a progressive publication. I’m not sure if that’s accurate, that’s how he represented himself.” He added, “He said the reason I’m being removed — talking about himself obviously — is that he had a sign.”

Acosta then speculated on live TV that, “It appears he was being removed from the room because he was carrying some kind of protest sign and he planned on causing a commotion.” Acosta suggested that I was a “journalist or posing as a journalist” who was “not willing to go on his own volition,” effectively implying I was to blame for the “scuffle” and that Finnish police were justified in removing me.

I’ve explained exactly what happened before. (Judge for yourself by watching a video of me explaining to reporters and officials why I had the sign.) Contrary to what Acosta reported, I didn’t expect to be taken out when I held it up. As I did, journalists were screaming at me to turn around so the TV cameras behind me would pick it up. (But I didn’t do that—as any self respecting protester would have—proving it wasn’t a protest, but a sign to get called on.)

At least CNN’s Christiane Amanpour correctly noted: “For all we know, that could have been a question — it sounds pretty innocuous.” 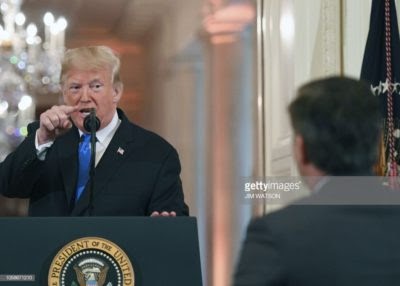 Acosta then tweeted: “Man describing himself as a reporter for The Nationforcibly removed from news conference.” The editor and publisher of The Nation, Katrina vanden Heuvel tweeted back at Acosta: “Sam Husseini, communications director of Institute for Public Accuracy, received press accreditation from @thenation to cover the summit. As Trump administration consistently denigrates media, we’re deeply troubled by reports that he was forcibly removed from press conference.”

Neither Acosta nor CNN responded.

A lie – that I was a protester, not an accredited journalist – went around the world as I was detained for hours in Helsinki.

Producers from CNN and other big networks called to have me on the air to explain what happened. But then all of them suddenly cancelled.

Now that Acosta and the media are protesting the White House’s suspension of his credentials I must ask why he and the other journalists that day didn’t intervene on my behalf or object to my expulsion?

Behind the “Ukrainegate” kabuki, Trump and “the Resistance” are as one (3)

Say NO to Arctic drilling!