Farmers plan mass march to protest India’s agrarian catastrophe (which “our free press” has not reported, so will not report the march) 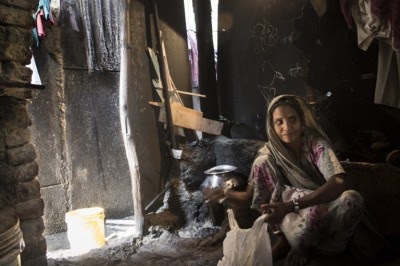 With over 800 million people, rural India is arguably the most interesting and complex place on the planet. And yet it is also one of the most neglected in terms of both investment and media coverage. Veteran journalist and founder of the People’s Archive of Rural India P. Sainath argues that the majority of Indians do not count to the nation’s media, which renders up to 75 percent of the population ‘extinct’.

According to the Centre for Media Studies in Delhi, the five-year average of agriculture reporting in an Indian national daily newspaper equals 0.61 percent of news coverage, while village-level stories account for 0.17 percent. For much of the media, whether print or TV, celebrity, IT, movements on the stock exchange and the daily concerns of elite and urban middle class dwellers are what count.

Unlike the corporate media, the digital journalism platform the People’s Archive of Rural India has not only documented the complexity and beauty of rural India but also its hardships and the all too often heartbreaking personal stories that describe the impacts of government policies which have devastated lives, livelihoods and communities.

Rural India is plagued by farmer suicides, child malnourishment, growing unemployment, increased informalisation, indebtedness and an overall collapse of agriculture. Those involved in farming and related activities are being driven to migrate to cities to become cycle rickshaw drivers, domestic servants, daily wage labourers and suchlike.

Hundreds of thousands of farmers in India have taken their lives since 1997 and many more are experiencing economic distress or have left farming as a result of debt, a shift to (GM) cash crops and economic liberalisation. According to this report,  the number of cultivators in India declined from 166 million to 146 million between 2004 and 2011. Some 6,700 left farming each day. Between 2015 and 2022 the number of cultivators is likely to decrease to around 127 million.

The core problems affecting agriculture centre upon the running down of the sector for decades, the impact of deregulated markets and profiteering corporations (Monsanto and its Bt cotton seeds being just one case in point), increasing debt and lack of proper credit facilities, the withdrawal of government support, spiralling input costs and the effects of cheap, subsidised imports which depress farmers’ incomes.

The root causes of India’s agrarian crisis have been well documented, not least by policy analyst Devinder Sharma, who says:

“India is on fast track to bring agriculture under corporate control. Amending the existing laws on land acquisition, water resources, seed, fertilizer, pesticides and food processing, the government is in an overdrive to usher in contract farming and encourage organized retail. This is exactly as per the advice of the World Bank and the International Monetary Fund as well as the international financial institutes.”

From the geopolitical lending strategies of institutions like the World Bank to the opening up of food and agriculture to foreign corporations via WTO rules and the US-India Knowledge Initiative on Agriculture, there is an ongoing strategy to displace the existing system of smallholder cultivation and village-based food production with one suited to the interests of global seed, pesticide, food processing and retail corporations like Monsanto-Bayer, Cargill and Walmart.

In outlining the nature of the agrarian crisis, P. Sainath encapsulates the drive towards corporate farming in five words:

“Predatory commercialization of the countryside.” He uses another five words for the outcome (referring to the mass migration from rural India): “The biggest displacement in history.”

By deliberately making agriculture economically non-viable for smallholder farmers (who form the backbone of food production in the country) the aim is to lay the groundwork to fully incorporate India into a fundamentally flawed and wholly exploitative global food regime that is undermining the country’s food security and food sovereignty as well as its health, soils, water supply and rural communities.

Rural India is in crisis. And with hundreds of millions destined to be forced to migrate to cities if current policies persist, the suffering will continue because the urban centres are not generating anything near the required levels of employment to soak up those whose livelihoods are being eradicated in the countryside. Jobless ‘growth’ haunts India, which is not helped by a global trend towards increasing automation and the impacts of artificial intelligence.

US drone strikes kill–and investigating them can kill you, too…