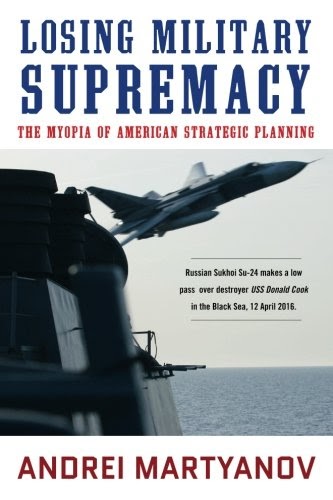 The fact that the US is facing a profound crisis, possibly the worst one in its history, is accepted by most observers, except maybe the most delusional ones. Most Americans definitely know that. In fact, if there is one thing upon which both those who supported Trump and those who hate him with a passion can agree on, it would be that his election is a clear proof of a profound crisis (I would argue that the election of Obama before also had, as one of its main causes, the very same systemic crisis). When speaking of this crisis, most people will mention the deindustrialization, the drop in real income, the lack of well-paid jobs, healthcare, crime, immigration, pollution, education, and a myriad of other contributing factors. But of all the aspects of the “American dream”, the single most resilient one has been the myth of the US military as “the finest fighting force in history”. In this new book, Andrei Martyanov not only comprehensively debunks this myth, he explains step by step how this myth was created and why it is collapsing now. This is no small feat, especially in a relatively short book (225 pages) which is very well written and accessible to everyone, not just military specialists.

Martyanov takes a systematic and step-by-step approach: first, he defines military power, then he explains where the myth of US military superiority came from and how the US rewriting of the history of WWII resulted in a complete misunderstanding, especially at the top political levels, of the nature of modern warfare. He then discusses the role ideology and the Cold War played in further exacerbating the detachment of US leaders from reality. Finally, he demonstrates how a combination of delusional narcissism and outright corruption resulted in a US military capable of wasting truly phenomenal sums of money on “defense” while at the same time resulting in an actual force unable to win a war against anything but a weak and defenseless enemy.

That is not to say that the US military has not fought in many wars and won. It did, but in the words of Martyanov:

Surely when America fought against a third-rate adversary it was possible to rain death from the skies, and then roll over its forces, if any remained by that time, with very little difficulty and casualties. That will work in the future too against that type of adversary—similar in size and flimsiness of Iraqi Forces circa 2003. But Ledeen’s Doctrine had one major flaw—one adult cannot continue to go around the sandbox constantly fighting children and pretend to be good at fighting adults.

The main problem for the US today is that there are very few of those third-rate adversaries left out there and that those who the US is trying to bring to submission now are either near-peer or even peer adversaries. Martyanov specifically lists the factors which make that kind of adversary so different from those the US fought in the past:

In the book, all these points are substantiated with numerous and specific examples which I am not repeating here for the sake of brevity.

Mimi Kennedy on "Voice of the Voters"