Covering the massacre in Yemen, vs. covering it up

Saudi-led coalition warplanes and battleships targeted several densely populated neighborhoods in Hodeida, including Southern Hodeida and areas adjacent to the airport, killing civilians and displacing others.

HODEIDA, YEMEN — Lying in torn, blood-stained clothing on a bed in Hodeida Hospital’s emergency room, 25-year-old Mabkhout, who refused to provide his last name for fear of retaliation, recounted the events which led him there:

I got up early this morning for this chance to work, we were transporting tires and oil from a shop to a tanker and suddenly a warplane bombed us. There were 20 of us workers, three of my friends were killed.”

Mabkhout, a father to two, lost one of his limbs in the attack. 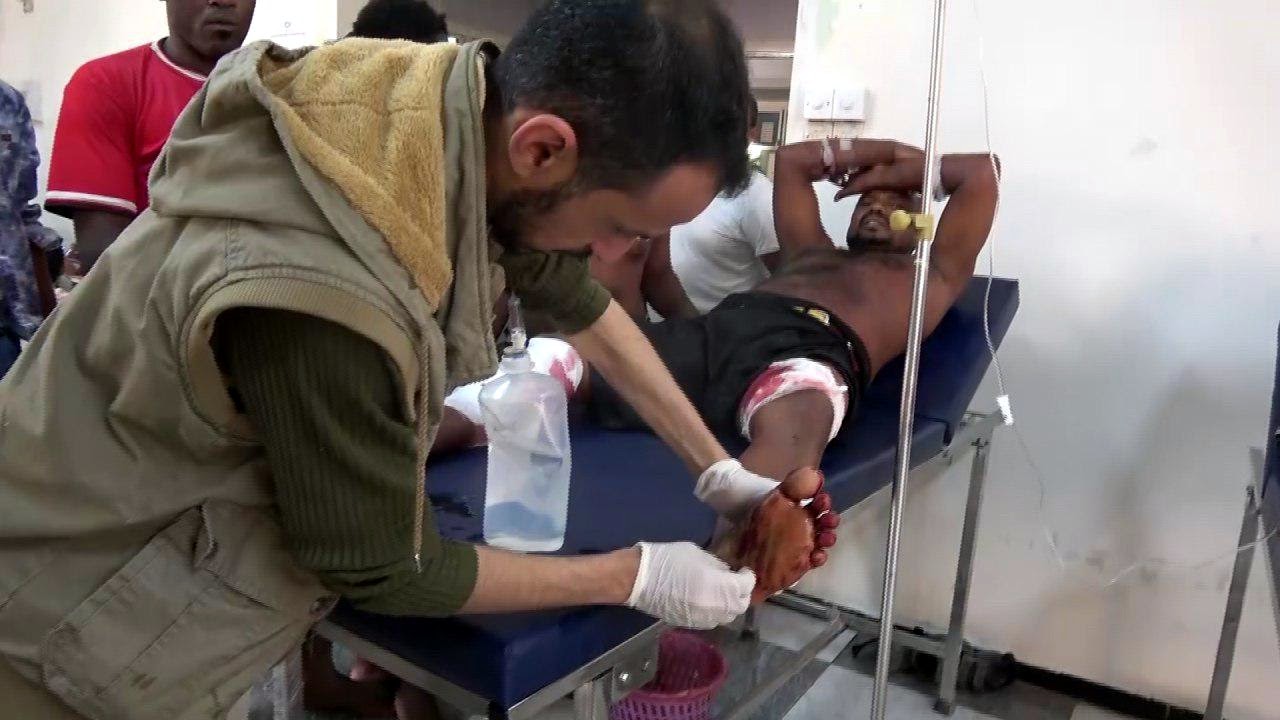 A man, who wished not to be identified, is treated in a Hodeida Hospital following an airstrike on workers in central Hodeida, Yemen. June 20, 2018. Photo | Ahmed Abdulkareem

At least 17 civilians were killed or injured by UAE airstrikes targeting workers near the neighborhood of Yemen Mobile Round in central Hodeida, Wednesday.

Earlier, the UAE’s Minister of State for Foreign Affairs, Anwar Gargash, said the coalition was taking into consideration a “fragile humanitarian situation” to avoid civilian casualties, in addition to military calculations.

Despite this, Saudi-led coalition warplanes and battleships targeted several densely populated neighborhoods in Hodeida, including Southern Hodeida and areas adjacent to the airport, killing civilians and displacing others. Over 100 airstrikes and rockets targeted Hodeida International Airport on Tuesday and Wednesday alone.

The Saudi-led coalition has claimed it has control of the airport, but Mohammad al-Bukhaiti, a top figure in the Houthi Supreme Political Council, appeared on video early Wednesday from the airport’s main gate denying that claim.

Meanwhile, UAE Apache attack helicopters conducted aerial attacks on schools and homes in the Manzar neighborhood abutting the airport compound Monday, forcing civilians to flee to schools inside Hodeida. “We have lived in a state of terror for three days because of the warplanes and Apaches; we were displaced on Wednesday,” said 45-year-old Khalied, a mother of six who lost her husband last year after a Saudi airstrike targeted his fishing boat.

The UN high commissioner for human rights, Zeid Ra’ad al-Hussein warned that the attacks on Hodeida could endanger the lives of millions, forcing civilians to shelter in schools. He added:

The Saudi- and Emirati-led coalition’s ongoing attacks in Hodeida could result in enormous civilian casualties and have a disastrous impact on life-saving humanitarian aid to millions of people, which comes through the port.”

Houthi leader Abdul Malik Al-Houthi stressed in a televised speech on Wednesday that Yemenis would continue to confront the U.S.-Saudi-led Coalition, adding any progress made by the invading forces in Hodeida would not mean the battle had ended, and that the Western Coast would become a quagmire that drowns the invading forces.

The Saudi-led coalition claims the port is a lucrative source of revenue for the Houthis, but Houthis deny these claims and have agreed to allow port revenue to be monitored by the United Nations if employee salaries are paid.

Ahmed AbdulKareem is a Yemeni journalist. He covers the war in Yemen for MintPress News as well as local Yemeni media.

Stories published in our Daily Digests section are chosen based on the interest of our readers. They are republished from a number of sources, and are not produced by MintPress News. The views expressed in these articles are the author’s own and do not necessarily reflect MintPress News editorial policy.

Like him or not, FL Tea Partier Alan West has every right to call for a hand recount