Amnesty report finds US guilty of war crimes in Syria. (Who knew?)

The US carried out war crimes in its four-month-long siege of the Syrian city of Raqqa last year, according to evidence gathered by Amnesty International and released in a report by the human rights group on Tuesday.

The report takes its title, “War of Annihilation,” from the description given by Defense Secretary James Mattis of the tactics that would be pursued in taking the city from the Islamic State of Iraq and Syria (ISIS). The report concludes that “the impact on civilians was devastating.”

“There is strong evidence that [US] coalition air and artillery strikes killed and injured thousands of civilians, including in disproportionate or indiscriminate attacks that violated international humanitarian law and are potential war crimes,” Amnesty International declared. 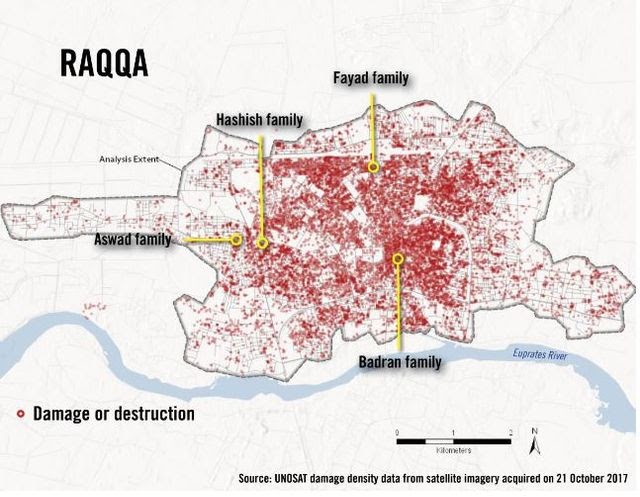 Areas of Raqqa that were damaged.

While the Pentagon utilized proxy ground troops in the siege, organized in the so-called Syrian Democratic Forces (SDF), comprised almost entirely of members of the Syrian Kurdish YPG militia, their advance was made possible only through a relentless bombardment by US warplanes and artillery units.

The Amnesty report quotes US Army Sergeant Major John Wayne Troxell, who declared: “In five months they [US Marines] fired 30,000 artillery rounds on ISIS targets. … They fired more rounds in five months in Raqqa, Syria, than any other Marine or Army battalion, since the Vietnam War. … Every minute of every hour we were putting some kind of fire on ISIS in Raqqa, whether it was mortars, artillery, rockets, Hellfires, armed drones, you name it.”

Using satellite imagery and eyewitness testimony, the report decisively refutes the claim by the top US commander in the operation, General Stephen Townsend, that the US offensive on Raqqa had been “the most precise air campaign in history.”