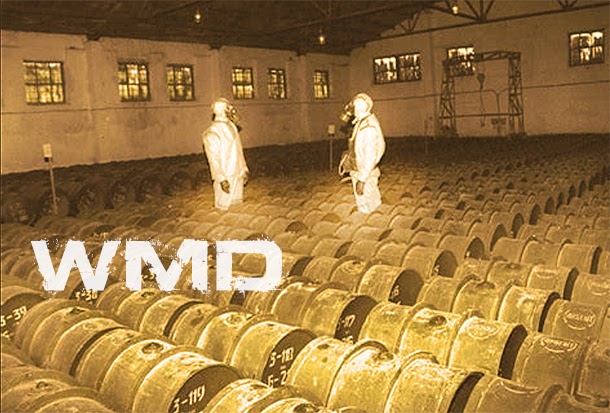 If there’s one thing to be gleaned from the current atmosphere of anti Russian hysteria in the West, it’s that the US-led sustained propaganda campaign is starting to pay dividends. It’s not only the hopeless political classes and media miscreants who believe that Russia is hacking, meddling and poisoning our progressive democratic utopia – with many pinning their political careers to this by now that’s it’s too late for them to turn back. As it was with Iraq in 2003, these dubious public figures require a degree of public support for their policies, and unfortunately many people do believe in the grand Russian conspiracy, having been sufficiently brow-beaten into submission by around-the-clock fear mongering and official fake news disseminated by government and the mainstream media.

What makes this latest carnival of warmongering more frightening is that it proves that the political and media classes never actually learned or internalized the basic lessons of Iraq, namely that the cessation of diplomacy and the declarations of sanctions (a prelude to war) against another sovereign state should not be based on half-baked intelligence and mainstream fake news. But that’s exactly what is happening with this latest Russian ‘Novichok’ plot.

Admittedly, the stakes are much higher this time around. The worst case scenario is unthinkable, whereby the bad graces of men like John Bolton and other military zealots, there may just be a thin enough mandate to short-sell another military conflagration or proxy war – this time against another nuclear power and UN Security Council member.

Enter stage right, where US President Donald Trump announced this week that the US is moving closer to war footing with Russia. It’s not the first time Trump has made such a hasty move in the absence any forensic evidence of a crime. Nowadays, hearsay, conjecture and social media postings are enough to declare war. Remember last April with the alleged “Sarin Attack” in Khan Sheikhoun, when the embattled President squeezed off 59 Tomahawk Cruise missiles against Syria – a decision, which as far as anyone can tell, was based solely on a few YouTube videos uploaded by the illustrious White Helmets. Back then Trump learned how an act of war against an existential enemy could take the heat off at home and translate into a bounce in the polls. Even La Résistance at CNN were giddy with excitement and threw their support behind Trump, with some pundits describing his decision to act as “Presidential.”

As with past high-profile western-led WMD allegations against governments in Syria and Iraq (the US and UK are patently unconcerned with multiple allegations of ‘rebel’ terrorists in Syria caught using chemical weapons), an identical progression of events appears to be unfolding following the alleged ‘Novichok’ chemical weapon poisoning of retired British-Russian double agent Sergei Skripal and his daughter Yulia in Salisbury, Wiltshire on March 4th.

Despite a lack of evidence presented to the public other than the surreptitious “highly likely” assessments of British Prime Minister Theresa May and Foreign Secretary Boris Johnson, President Trump once again has caved into pressure from Official Washington’s anti-Russian party line and ordered the expulsion of 60 Russian diplomats – which he accused of being spies. Trump also ordered the closure of the Russian Consulate in Seattle, citing speculative fears that Russia might be spying on a nearby Boeing submarine development base. It was the second round of US expulsions of Russian officials, with the first one ordered by the outgoing President Obama in December 2016, kicking out 35 Russian diplomats and their families (including their head chef) and closing the Russian Consulate in San Francisco, with some calling it “a den of spies”.

Trump’s move followed an earlier UK action on March 14th, which expelled 23 Russian diplomats also accused of being spies. This was in retaliation for the alleged poisoning of a retired former Russian-British double agent in Salisbury, England.