The Trade Creature Walks Among Us!

by Michael Winship
http://www.huffingtonpost.com/michael-winship/the-trade-creature-walks_b_8261136.html
Posted: 10/08/2015 7:28 am EDT Updated: 10/08/2015 2:59 pm EDT
Die, monster, die! Every time you think that beast called the Trans-Pacific Partnership — TPP for short — is finished, it comes back like a bad penny; or in this case, trillions and trillions and trillions of bad pennies.

A few weeks ago, talks in Maui collapsed and the massive trade deal, affecting some 40 percent of the world’s economy, seemed close to death. But no amount of stakes through the heart or flaming torches or even witch-dissolving buckets of water can seem to keep this behemoth down. There they all were at the Westin hotel in Atlanta on Monday, the trade representatives of a dozen Pacific Rim countries, grinning ear-to-ear at a press conference announcing that after eight years and several days of extra, non-stop finagling, the fix was in.

So now, as we head toward the climax of this horror story, it’s going to take all of us villagers storming the monster’s lair with our pitchforks to bring TPP down.

Like all manmade, fantastical creatures, this TPP thing has been conceived in secret. Top secret. You could even go to jail for divulging its contents. Few have been able to see the actual text — all 30 chapters of it — except for some 600 “cleared advisors,” the majority of whom are from big business, and even they have been restricted in what they’re allowed to examine.

In May, one of the non-business cleared advisors, Michael Wessel, wrote in Politicothat he and his colleagues were also “prohibited from sharing publicly the criticisms we’ve lodged about specific proposals and approaches. The government has created a perfect Catch 22: The law prohibits us from talking about the specifics of what we’ve seen, allowing the president to criticize us for not being specific… What I can tell you is that the administration is being unfair to those who are raising proper questions about the harms the TPP would do.”

In fact, political scientists Michael Colaresi and Nathan Jensen polled fellow political scientists for The Washington Post and found that their comments “suggest that secrecy has little impact on helping the U.S. get a better deal. Instead, it helps insulate the government from interest-group pressure, whether from business on the left or environmental and labor groups on the left.”

Most of all we know so far has been the result of Wikileaks and a twelve-page summary issued by the US Trade Representative when the deal was announced on Monday. The American Prospect‘s David Dayen said, “There appears to be improvements around the edges: preventing tobacco companies from using the investor-state dispute resolution process, a lower exclusivity period for high-cost biologic drugs. But these are pretty small. The main structure of the agreement was already in place, one designed to protect incumbent profits and sacrifice U.S. jobs, with very dubious claims about labor and environmental standards that have simply never been enforced in other trade agreements, including by this administration.”

So, if upheld and obeyed, there are bans on child workers and pledges to allow collective bargaining in countries that have brutally oppressed organized labor. Conservation groups are happy about measures to fight wildlife poaching and overfishing. But there are also patent and market exclusivity rules that restrain competition, worries about food safety, a snare of complications for intellectual property and internet freedom, rules that could allow multinational corporations to run roughshod over the regulations of allegedly sovereign nations and much more. “For us, any TPP is making things worse,” Peter Maybarduk, director of the the access-to-medicines program at the public interest group Public Citizen, told The New York Times. The pharmaceutical industry in particular “will have many more tools with which to defend its monopoly business model.”

The good news is, there’s still time. Many, many details still need to be worked out before the entire TPP text must finally be revealed. Weeks and months will pass before a harshly divided Congress confronts the monster — it may not be until April of 2016, amidst our presidential election year. What’s more, as we all know, “The public is demonstrating a lot of dissatisfaction with the traditional ways of doing things in Washington.” So former diplomat Clyde Prestowitz told The American Prospect. “This deal is not going to reduce economic inequality in the U.S. Rather it is going to add to it. If some of the presidential candidates pound away at that fact, it is possible to foresee a wave of public frustration and anger leading to defeat of the TPP in the Congress.” 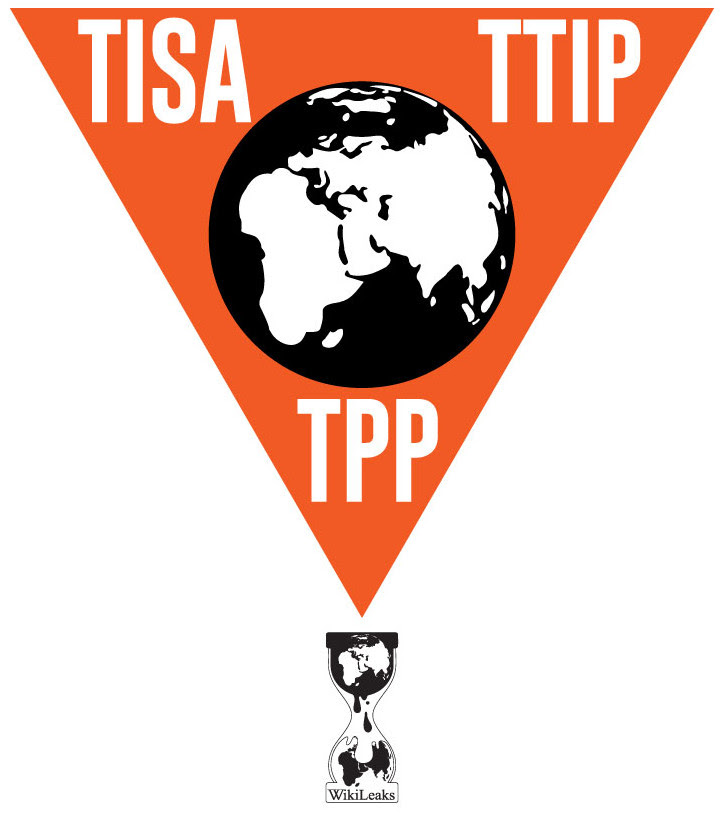 Today, 9 October, 2015 WikiLeaks releases the final negotiated text for the TPP (Trans-Pacific Partnership) Intellectual Property Rights Chapter. The TPP encompasses 12 nations representing more than 40 per cent of global GDP. Despite a final agreement, the text is still being withheld from the public, notably until after the Canadian election onOctober 19.

The document is dated four days ago, October 5th, or last Monday, the same day it was announced in Atlanta, Georgia that the 12 member states to the treaty had reached an accord after five and a half years of negotiations.

The IP Chapter of the TPP has perhaps been the most controversial chapter due to its wide-ranging effects on internet services, medicines, publishers, civil liberties and biological patents. “If TPP is ratified, people in the Pacific-Rim countries would have to live by the rules in this leaked text,” said Peter Maybarduk, Public Citizen’s Global Access to Medicines Program Director. “The new monopoly rights for big pharmaceutical firms would compromise access to medicines in TPP countries. The TPP would cost lives.”

Hundreds of representatives from large corporations had direct access to the negotiations whereas elected officials had limited or no access. Political opposition to the TPP in the United States, the dominant member of the 12 negotiating nations, has increased over time as details have emerged through previous WikiLeaks disclosures. Notably, the Democratic front runner, Hillary Clinton, came out against the TPP on Wednesday saying: “Based on what I know so far, I can´t support this agreement.” This is a populist reversal by Hillary Clinton as earlier she has hailed the TPP as “the gold standard in trade agreements”.

In June the House of Representatives of the US Congress narrowly approved to “fast-track” the TPP, preventing the Congressmen from discussing or amending any parts of the treaty, only vote for or against it. 218 voted for the “fast-track” measure and 208 against. Only 28 House Democrats backed it. TPP is the first of a trinity of US backed economic treaties, the “Three Big T’s”, to be finalized. The other two being Trade in Services Agreement (TISA) which covers 52 countries and TTIP, the EU-US version of TPP.