County: Life, Death and Politics at Chicago’s Public Hospital
by David A. Ansell 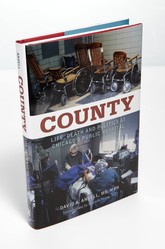 ‘Patients with toothaches, loose teeth, oral tumors and mouth abscesses lined up in painful silence during the dark hours of the early morning… some in wheelchairs, others with canes and crutches raced to get to the Oral Surgery clinic to win one of the 50 prized slots that guaranteed a dentist would see them.’

>From his start three decades ago as a resident at one of America’s oldest and most battle-scarred public hospitals, the author daily confronted the issue that plagues the nation’s health care to this day: how to deliver quality medical services regardless of race and income.

One of a group of idealistic young doctors in the 1970s, he worked in an antiquated, dirty facility that was the first to serve blacks and immigrants—but was infested with rats and cockroaches and still treated patients in open wards with no air conditioning.

“We were practicing Third World Medicine in Chicago…I shudder to think how many patients I may have harmed or killed because we could not diagnose or treat them quickly enough.” But the doctor is inspired to carry on by the dignity, strength and resolve of the patients who come from violent and crime plagued neighborhoods.

The hospital is often a pawn in Chicago politics, as the staff fights the dumping of patients from other hospitals who refuse to treat the uninsured, and provides care on the front lines of the early AIDS epidemic. There are some triumphs, like a new breast-cancer screening program. But Dr. Ansell, now chief medical officer at Rush University Medical Center, warns that efforts to achieve health equity still have a long way to go.