We MUST have grass-roots exit-polling operations in all 30 districts! “Trust but verify!”
MCM

Several excerpts and some cartoons:

From the conservative InvestorsInsight Publishing
The Mid-Term Elections: More Bad News For The GOP
by Spencer Wright
[T]here is now the possibility that the Democrats could retake the House of Representatives, and maybe even pick up a couple of Senate seats as well. There has been a gigantic shift in the electoral map, perhaps one of the greatest shifts in recent political history. I must tell you going in, that most of the blame for this massive shift lies with President Bush and his administration, The GOP has actually LOST ground on, national security issues where they have (or did have) the voters’ confidence. And the issues they are articulating – flag burning, family values, etc. – are narrowly focused at the far right portion of their base.

From the conservative Human Events
30 Republican House Seats in Jeopardy
by John Gizzi
Posted Apr 24, 2006
With President Bush’s popularity at an all-time low, hovering in the mid-30s in most national surveys, and the conservative base of the Republican Party increasingly dismayed with the President’s performance on issues such as runaway government spending and immigration “reform,” chances are increasing that the Democrats could eke out a majority in the House of Representatives in the elections this fall. Four months ago, I concluded that there were 20 Republican House seats that were vulnerable to Democratic takeover, now I believe that there are 30. To achieve a majority, the Democrats would need to win a net gain of 15. 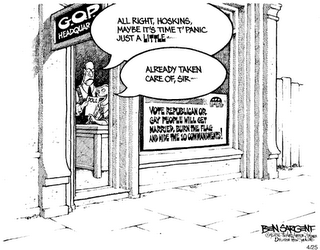 Maybe Tony Snow thinks he can save the Bush presidency.

Think Progress, Center for American Progress
Snow gets demanding. Prospective White House Press Secretary Tony Snow has reportedly “asked for guaranteed access to the president’s ear and to an unusually large degree of latitude to reconfigure the WH press operation. Snow, not content to be a herald, also wants near-complete control over what he says from the podium, be it bromides, platitudes or substance.” April 25, 2006

He’s been critical in the past. Also from Think Progress
Tony Snow On President Bush: ‘An Embarrassment,’ ‘Impotent,’ ‘Doesn’t Seem To Mean What He Says’
Fox News’ Tony Snow is expected to be named White House Press Secretary. Here’s some of what he’s had to say about the President:
– Bush has “lost control of the federal budget and cannot resist the temptation to stop raiding the public fisc.” [3/17/06]
– “George W. Bush and his colleagues have become not merely the custodians of the largest government in the history of humankind, but also exponents of its vigorous expansion.” [3/17/06]
– “President Bush distilled the essence of his presidency in this year’s State of the Union Address: brilliant foreign policy and listless domestic policy.” [2/3/06]
– “George Bush has become something of an embarrassment.” [11/11/05]
– Bush “has a habit of singing from the Political Correctness hymnal.” [10/7/05]
– “No president has looked this impotent this long when it comes to defending presidential powers and prerogatives.” [9/30/05]
Posted by Think Progress April 25, 2006

0 replies on “30 Busheviks in jeopardy”

Left-wingers have been screaming previuosly that Tony Snow (and evrybody else at Fox News)was just a shill for President Bush and all conservatives. Now they are playing up his remarks criticizing Bush. Actually, a lot of lefties are trying to say both at the same time. Doesn’t work. Come on, boys and girls. Is Tony Snow a shill and a yes-man, or is he a critic? Actually, Tony Snow is a good man. He’ll do a fine job.