The Survey USA 50-state polling is out for November, as noted before, and it’s not good news for Bush in more ways than one. His `base’ of strong support has dwindled to a grand total of two states. He is also losing ground among Republicans, notably in the South. And the number of respondents who are identified as Republican is decreasing. Will Bush ruin his own party? Maps and charts below…

First, the political landscape. Bush is loathed in the Northeast, and highly unpopular in parts of the Midwest and California. Most of what were called the swing states give him a 36-40% rating. His solid support in the Plains and the South is mostly a measly 41-45%. (I guess there’s not too much the matter with Kansas after all.) Only a handful seem to have any sort of sympathy for him whatsoever. This map is so much more satisfying than the ones from last year. And it supports the idea that we shouldn’t abandon certain regions of the country: they are coming to their senses. 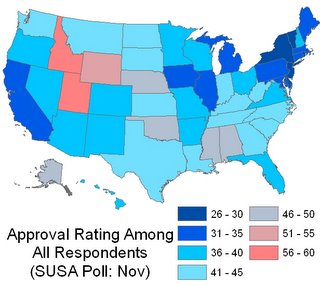 0 replies on “Bush's ever-shrinking base”

In case anybody has bothered to notice, the Dems’ poll numbers are even worse. They aren’t going to make any substantial gains in ’06. Nobody will.

In case you bothered to notice, the dems have a much better chance to steal the heretofore rep electoral in many states, even if just to punish the neocons.

We can destroy the Republican agenda and advance a progressive agenda.

The Dems won’t make substantive gains because they have no vision, no message other than “Bush sucks”. If they pander to the barking moonbats, it will be their undoing.

While I happen to believe in a larger, conspiratorial view of how power operates – in which the left plays its needed role – there are undoubtedly many good people fighting the good fight for the dems. The problem is, any solid “strategy” they have aside from occassionally pointing out the glaringly obvious crimes of the right, is strategically ignored and spun by the mainstream media structure which largely, as a corporate structure, favors the profits of war profiteering. It’s not that the dems can’t ‘package’ a Vision For America{*plays theme music*}, but that any non violent, altruistic plans are downplayed or outright omitted from cable “news” programming, while folks like yourself keep jumping up and down over the mass murdering of scores of innocent Iraqis dressed up in “liberdy n’ free-dumb’ propaganda…